The FBI has infiltrated a "Bible study" group in Virginia that after the January 6 riot had members discussing surveilling the US Capitol and their wish for secession from the US, and investigators closely followed one member's plans to build and test Molotov cocktails, according to recently unsealed court records.

The new case highlights one group member's apparent interest in a second American civil war. The newly disclosed criminal case against Virginia man Fi Duong -- who also goes by "Monkey King" and "Jim," according to the court record -- arose after Duong interacted with undercover law enforcement officers several times on January 6 and into recent months, when the FBI ultimately gained access to his group in Virginia then accompanied him to an old jail as Duong allegedly pursued bomb-building.

Duong was arrested last week, after the Justice Department charged him with four federal crimes, including entering the restricted grounds of the Capitol and obstruction of an official proceeding related to his alleged participation in the siege on January 6, according to his court record. On January 6 in downtown Washington, Duong spoke with an undercover Metropolitan Police officer, according to his charging papers.

Duong was dressed in black, in an alleged effort to disguise himself as the leftist group antifa, investigators say. During the conversation, Duong asked the undercover officer if they were a "patriot," and identified himself as an "operator," according to FBI records supporting his arrest.

How pathetic. We really are now living in a banana republic. 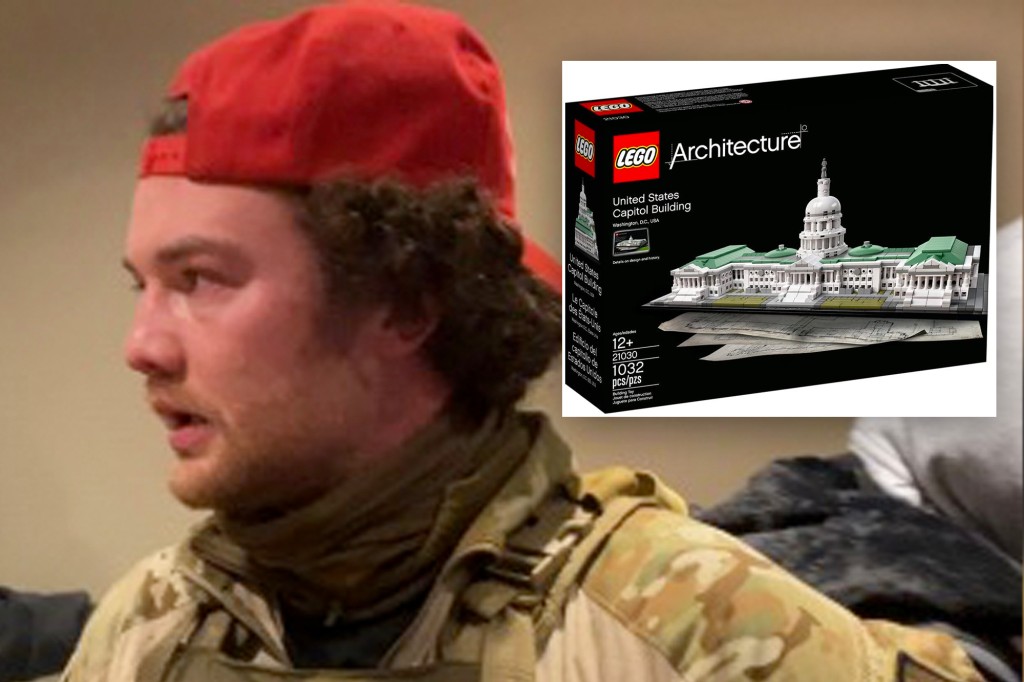 The FBI is building its case against an alleged lead of the Jan. 6 Capitol riot one Lego brick at a time.

Pelosi's team would have shut this group down months ago.

LesBolstad said:
How pathetic. We really are now living in a banana republic
Click to expand...

We were, but we've been recovering rapidly since Jan 20th.

Spoofin said:
Pelosi's team would have shut this group down months ago.
Click to expand...

Because the point of the House Committee is to infiltrate active groups and shut things down.

howeda7 said:
Because the point of the House Committee is to infiltrate active groups and shut things down.

No, the point of the house committee is to grandstand. Oh, and do all the parts of the investigation that the FBI doesn’t do, right? Super sleuths.

Spoofin said:
No, the point of the house committee is to grandstand. Oh, and do all the parts of the investigation that the FBI doesn’t do, right? Super sleuths.

The FBI isnt investigating the organizers, the causes, the weaknesses in capital defenses, preventing future attacks, just off the top of my head.

35 Republicans in the house voted for just such an investigation, but McConnell and the spineless Senate Republicans wouldn't even vote on the measure. Now, it's "political?" 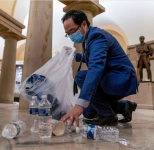 A review of last year’s domestic terrorist incidents by a DHS fusion center — which shares threat-related information between federal, state and local partners — found that right-wing [domestic violent extremists] were responsible for the majority of fatal attacks in the Homeland in 2020.” The report, produced by the Joint Regional Intelligence Center, a DHS-funded fusion center, was sent out to police and law enforcement agencies nationwide as part of an intelligence-sharing system created after the 9/11 attacks.

While independent think tanks and outside groups have been pointing to the rise in right-wing violence for some time, this appears to be the first known instance of an official government or law enforcement agency clearly acknowledging the trend, though senior officials have noted the rise in white supremacist attacks. The report also comes not long after the end of the Trump administration, which was criticized for downplaying right-wing violence. Former President Donald Trump, in particular, frequently referred to the threat from antifa, a loose movement of left-wing activists.

The findings about right-wing extremism are “consistent with every single assessment of data I’ve seen, not just in 2020 but in 2019,” Jones said after reviewing the fusion center report. In October of last year, CSIS published its own analysis of domestic terrorist activity in the U.S. for the first eight months of 2020. Its data showed that white supremacists and other right-wing extremists conducted two-thirds of the terrorist plots and attacks in the nation during that period.

“The Jan. 6 assault on the Capitol and the tragic deaths and destruction that occurred underscored what we have long known: The rise of domestic violent extremism is a serious and growing national security threat,” White House press secretary Jen Psaki said on Jan. 22 in announcing the review. “There is a lot of overlap between white supremacists and far-right militias, and they often work together during the commission of violent acts,” German said, “like at the attack on the Capitol.”

The Portland police allowed Antifa to control downtown blocks for months - and no one seemed to care. Let this guy do it for 17-minutes and Broke’s outraged. 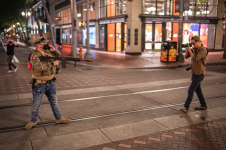 Lefty-Desiree McLefty Face, Antifa Paparazzi? Surprised it took Broke so long to find this wizard of the English language

Ask yourself why do the conservatives love the nazi logo so much. Is it because liberals are the real racists? Right.

LA Times: One person stabbed as anti-vaxxers and counterdemonstrators clash in front of L.A. City Hall ​

An anti-vaccine rally at Los Angeles City Hall turned violent Saturday, with one person stabbed and a reporter saying he was assaulted, according to police and protesters on the scene. A crowd of several hundred people, many holding American flags and signs calling for “medical freedom,” had descended on City Hall around 2 p.m. for the planned rally. A few dozen counterprotesters had amassed on 1st Street near the former offices of the L.A. Times before the clash.

A fight erupted on the corner of 1st and Spring streets shortly after 2:30 p.m., as counterprotesters in all black and anti-vaccine demonstrators draped in American flag garb and Trump memorabilia traded punches and threw things at one another. It was not immediately clear how the fight started, though each side quickly blamed the other. One person, who the anti-mask protesters claim was part of their rally, could be seen collapsed in the intersection, bleeding. Police on the scene said the person had been stabbed, and paramedics arrived to take him to a hospital.

Capt. Stacy Spell, a Los Angeles Police Department spokesman, said police were monitoring the protest. “We are on scene to maintain order after a fight broke out between Antifa and people gathered for the permitted event. We are aware of one male that was stabbed and is being treated by Fire Department personnel,” Spell said in a statement. “No arrests have been made but [the] investigation is ongoing.” Spell could not immediately provide an update on the victim’s injuries.

While the statement referred to “Antifa,” the counterprotesters appeared to be a mixture of people who have shown up to oppose anti-vaccine and anti-mask rallies in recent months.

A short time later, KPCC reporter Frank Stoltze could be seen walking out of the park near City Hall being screamed at by anti-mask protesters. One man could be seen kicking him. Stoltze later told a police officer he had been assaulted while trying to conduct an interview. Spell confirmed that a police report was taken.

Stoltze later tweeted this statement: “Something happened to me today that’s never happened in 30 yrs of reporting. In LA⁩ I was shoved, kicked and my eyeglasses were ripped off of my face by a group of guys at a protest - outside City Hall during an anti-vax Recall ⁦@GavinNewsom⁩ Pro Trump rally.”

The demonstrators had billed the rally as a stand against rules requiring COVID-19 vaccinations and so-called vaccine passports and said they also opposed wearing masks. A flier advertising the counterdemonstration decried the group as fascists.

Spoof will be along any minute now to renew his year+ long claim that there is no political element to the anti-mask, anti-vax, anti-science extremists.

The anarchists are now counter protesting in favor of mask mandates and increased government/corporate control over the proletariat?

Random Gopher Fan said:
Ask yourself why do the conservatives love the nazi logo so much. Is it because liberals are the real racists? Right.
Click to expand...

USAF said:
Spoof will be along any minute now to renew his year+ long claim that there is no political element to the anti-mask, anti-vax, anti-science extremists.
Click to expand...

He's in Sioux Falls hunting for the Antifa who attacked Pillow Guy. Please stand by.

howeda7 said:
He's in Sioux Falls hunting for the Antifa who attacked Pillow Guy. Please stand by.
Click to expand...

You really are obsessed with me. Have you ever been charged with stalking? Downplaying violence in America and violent groups is a great look for you tho. Kudos.

Spoofin said:
You really are obsessed with me. Have you ever been charged with stalking? Downplaying violence in America and violent groups is a great look for you tho. Kudos.
Click to expand...

In Spoofs snowflakey world responding him is equivalent to stalking him. There are always monsters under the bed with this one.